Category: Letters from the Bishop

I want to thank those of you who prayed for my recent trip to Israel and Poland. I was accompanied by my teenage grandson, Benjamin Hall.

To make a long story short, when Archbishop Foley Beach heard that I was heading to Israel for a personal trip, he asked if there was some way I could stop in Poland along the way and ordain a Ukrainian woman named Nina there. His diocese is closely connected to Christ Church, the historic Anglican congregation in the walled Old City of Jerusalem. Nina will serve there, once her visa goes through.

Two days after I said yes to the archbishop, war broke out. Nina was teaching at a Ukrainian Bible college in Kyiv. The question then became, could she get to Poland as originally planned?

Let me share two miracles, clear acts of the Lord to expand his kingdom.

First of all, Nina did get out on about the fifth day of the war, despite the huge difficulties that she and many other refugees faced along the way. These included standing in the cold while waiting hours for the next train, a train ride that normally took four hours taking twelve, little food and water, and the sounds of war all around them. 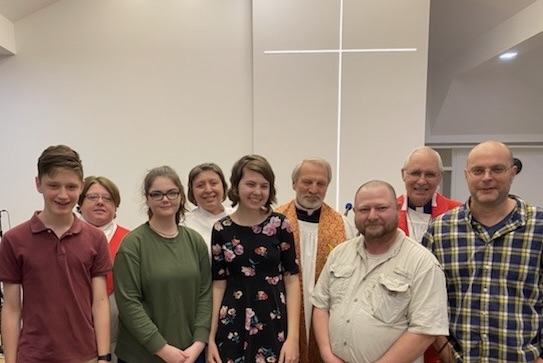 Secondly, the Friday night ordination service in Krakow was going to be very small. Only Nina, another woman deacon named Dana from Christ Church, Daryl Fenton the leader of the Jerusalem ministry, Kristoff the Baptist minister who was hosting us, Benjamin, and I were to be there. But by a move of God, we were connected with a father and daughter, members of Incarnation in Tallahassee, who were also in Krakow. They were focusing on refugee work among Ukrainian orphans. They came to the ordination bringing with them three other members of their team, almost doubling the size of the congregation. As a result Nina, who is multi-lingual, is already helping them with the children. Only the Lord could have put all that together.

The orphan rescue team members came from churches throughout the US. They told of how many other Christians have arrived in Poland and its neighboring countries to help in the catastrophic refugee crisis. Beneath the headlines, the Lord Jesus is motivating his people to sacrificially risk their lives, with many crossing into war zones in Ukraine to reach orphans and foster families. At the same time, there are also sex traffickers just waiting to capture refugee children. The signs of spiritual warfare abound.

I don’t know about you, but I have often been discouraged by the listlessness and cultural captivity of the church in America. This trip reminded me that there are many Christians acting much like the apostles did by putting the needs and safety of others far ahead of their own. We had a glimpse of what life in the early church must have been like on the best days.

And please pray that the war will end soon.

Above all pray for the Lord Jesus to shower his mercy and grace in such a way that many will believe the gospel because they will have experienced examples of apostolic faith all around them.

In Jesus the Messiah,

Photo caption: Nina is the fourth from the left. Two are missing from the photo.

Reaching Out in Epiphany

An Unexpected Way to Prepare for Christmas

A Tale of Two Countries: An Israel Tour and A New Missional Initiative

Peace in a Shaken World

Let Us Not Turn Back to Folly

May Our Sad Divisions Cease*

From Fear to Freedom

Responding to Violence And Praying for our Nation

Responding to the Violence in Washington DC

December Communique Letter from the Bishop

July Communique Letter from the Bishop

A Helpful Overview of Churches During Pandemics

May Communique Letter from the Bishop

To All Diocesan Clergy Regarding Holy Communion

Timing and Leadership in a Difficult Season

April Communique Letter from the Bishop

Steps for Reopening and Invitation to Zoom Call

Drive-by Communion No Longer in Effect, Next Steps

Time to Rejoice And A Time To Give

When Will We Worship Together Again?

Now What? COVID19 Next Steps for Congregations

The New Book of Common Prayer and Guidelines for Its Use